American Stories One: The Luck of Roaring Camp

So, I’m a 53-year-old rookie. Very recently, I’ve released the first-ever audio track featuring my singing and playing. It’s posted for public consumption on my brand new youtube channel. I wrote the song years ago, based on Bret Harte’s story, “The Luck of Roaring Camp.” I first read the story in college, and it pulled me in with its pacing and won me over with its mix of sentimentality and darkness, and I was also taken with the tension between the narrator’s poetic language and the rough mining-camp dialogue.

When I revisited it years later, it struck me as being even more dark, funny, and sweet than I’d remembered. Dark: it starts with a displaced Native American woman, whose circumstances have forced her into a life of prostitution, dying in childbirth at a mining camp, and gets darker later. Funny: the men at the camp are these hardscrabble anti-social types, and this results in a lot of fish-out-of-water humor as they set out to raise this orphaned baby. Sweet: they fall in love with the baby, the bunch of them, and find that there is a magic in being connected, and in taking care of someone. The rugged individualist way of thinking that has until now informed their lives gets some serious pushback by lived experience. 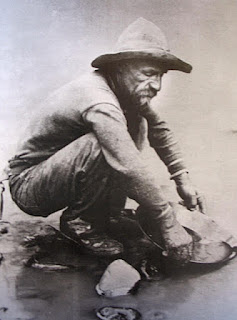 Anyway, I like the mix of elements in the story. In its lyricism about a hard world, I hear some of what I like about Townes Van Zant. And I can see a just-emerging mix of themes and a storytelling style/voice  that I think informs Larry McMurtry’s writing (though McMurtry is a better writer). Harte was swinging for the fence here, hoping to become a famous writer back East while writing about the West. Mark Twain, a rival and friend before their falling out, was trying to do something similar at the same time, but “The Luck of Roaring Camp” put Harte way out in front for a while.

Years ago, I’d gotten on a kick of writing songs drawn from famous short stories. I’ve got songs based on stories from Nathaniel Hawthorne, Louisa May Alcott, Willa Cather, William Faulkner, and others, but this one’s my favorite of the batch. I had imagined the song as a short film, and at one point engaged Austin singer-songwriter Woody Russell to do a big, lush, widescreen version of my song, but I never did get the project together on the video side (see “time and money, lack thereof”). When I recorded the demo that Woody based his recording on, he nudged me to just play and sing the song myself. Even with his encouragement, though, I wasn’t quite there yet, in terms of feeling confident enough in my playing and singing. Since then, I’ve gained some ground on both skill and confidence.

Anyway, with help from some talented friends, I finally made the recording I wanted, and now it’s the debut video on my youtube channel. If you enjoy it, please like, share, etc. I’m not trying to get rich or famous; John Prine has little to fear from me, but I am trying to slowly build up a small but appreciative audience/readership for my poems, songs, and stories.